I think they said that there will be an intelligent weapon which can talk to the player like the one in deadfire or others. I will say that I think it should be possible to choose the weapon and as such someone else said he would like it if the weapon is chooseable it would be cool for it to be able to choose it as a shield.

Mh, I am not sure that’s a good idea to be able to choose what form our talkative weapon would be…
I mean, on one hand that would be very convenient for the player yes, but I feel like it needs to be implemented as a one of a kind item like any written NPC with a specific story attached to it.
As for your last suggestion, it says in the core rulebook that the shield entry belongs to the armor section so I am not sure that could really count as a weapon (a bludgeoning one if it’s a heavy shield maybe but technically not a “real” weapon).

It’s not a good or bad idea, it’s the only idea that makes sense in my opinion. A RPG is not a simple story written by one author from start to end, it is a story written by both the original writers and the player and the character he chooses.
In a classic story, the author can choose any weapon that suits their purpose, and they will make the MC use the weapon however they want it to suit their story.
In a RPG, the MC can be different things (classes, sexes, races, alignments, etc.) You cannot write the story without adapting it to the characters the players will use. That is very difficult to do, but if you don’t, you miss the point of a RPG.

Say they give the MC a long sword, one of the most used weapons in classic storytelling. Half the classes will not even be able to use it. Spellcasting classes, even if they are able to use it, won’t take much advantage of a sword because they won’t use it. An archer won’t use it. A two-weapon-fighting Rogue probably won’t use it. So most people would not use it. What’s the point of having it, then ? Better give an orb, a rod or something like that that could be kept in one’s bag or at the belt.

Well that is the thing in a tabletop game the dm can read a players preferred weapon and give them that one or never give that weapon type or allow any advanced versions of that weapon to be sold. As such giving a fixed weapon might not work if the player and all companions can’t use that weapon type would sell that weapon. Thus a greater way to take advantage of this would be seen in nwn:km, where the player gets such a weapon.

Thus a player would choose a weapon they love rather than having to spec into a weapon because it is the best in slot.

They could make it a reward for a quest. Maybe some arcane blacksmith is afraid of his soul being judged by Pharasma for whatever reason and decides to tether it to the Material Plane by embedding it in a weapon. In exchange for helping him forge it, he allows you to pick what the weapon is and become its owner. From there he’s like a pseudo-companion and could even have a basic level tree.

I dont mind if they decide what kind of weapon it would be, but it would be increadibly anoying to not know in advance what weapon one should be looking for… Imagine it being say, a Falchion and you making a two handed great sword focused fighter, with no other members of your party who use Falchions. That would then relegate the weapon to the discard bin, even if it is intelligent and a good story aid.
To pigeon hole the intelligent weapon and not give the player any knowledge of what that will be, essentially makes it almost worthless

Even if we know the type in advance, it would mean we would have to focus our MC towards that weapon and not another, which would limit our choices of builds. That would be a shame given all the choices we have in this game.
So I don’t think Owlcat will make that mistake. I think they will give us the choice of the weapon (like a weapon that has the power to take any form the wielder likes best, or it will be forged or reforged according to our whim). an inferior choice will be to limit our choice to some weapons only (probably to limit the designer’s work), like a staff, a 2-H sword, a 1-H sword, a mace, an axe, a bow, etc.
Another way to do it would be to make it a unique weapon (say a bastard sword), but give the wielder proficiency in it, and any weapon feat they have is working with that weapon.

It seems an obvious and simple solution to me, for the intelligent part of the weapon to be a gemstone or insubstantial soul energy or something that is forged onto a weapon, rather the entire weapon itself.

Indeed, that would also solve the problem, and it might travel from weapon to weapon.

A shield sounds fun. If you shield bash, it will tell you its head hurt. Like: ‘Ouch, my head’. There should be a real face on the shield so it makes sense. If it gets hit too often it uses the Shout spell by blowing sonic from its mouth or fire etc., whatever.

Can the Weapon talk like a Rapper?
Because that idea amuses me.

Might amuse you, but it’d make others, like me, immediately ditch it and not ever use it.

Narratively, you could also solve this quite easily.

“The light coalesced into the form a weapon before me, the one that best suited my needs. It was a…”

You can probably copy paste all the special abilities into a few generic categories of weapons: 1h, 2h, ranged, caster implement. And then just have the player pick their preferred base weapon.

Reminds me of The Bane from Borderlands 2. It was very amusing at first but that shit gets old fast.

I always wanted to be an Etcetera wielding warrior

As written somewhere else I have the following idea:

Whatever type of weapon it is, if the MC cant use it, it needs to be a viable choice for 1 companion and which stays with the MC regardless of chosen Mythic Path.

It could also be an accessory slot that buffs your weapon, ie a talking necklace that gives a + X “companion” bonus on your to-hit, damage and spell DC rolls.

Or it could be a golem/construct/inanimate object of sorts—it’s own companion. It would level through acquiring rare metals or magical items to install/graft into the item. It could then have a spell battery of arcane spells to fill the wizard role in Wrath and then be lawful neutral in personality. I know—unlikely—but boy would this be cool.

Or it could be a shifter weapon. It becomes a sword for a sword user, dagger for a dagger user, etc.

I think what really matters is if we can kill the wepon compaion or not?

It could also be an accessory slot that buffs your weapon, ie a talking necklace that gives a + X “companion” bonus on your to-hit, damage and spell DC rolls. 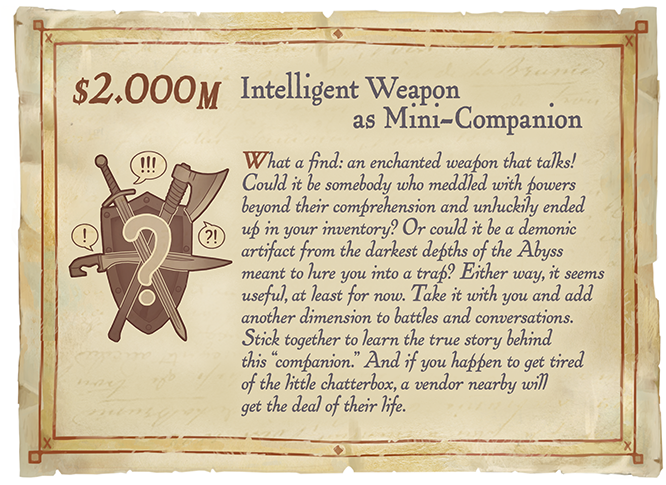 I think the image showing different weapons (Longsword, Battle Axe, Kukri) as well as even a shield hints that we will indeed be able to choose its type with shields being an option. I hope this includes the Tower Shield option !