Developers’ Diary, the Enhanced Edition: Tons of Weapons, Better Balance and the Long

Hello, fellow Pathfinders! It’s time to reveal some more cool new features of the Enhanced Edition, which, as we hope, will make you happy. Some of them you could already guess, looking at the EE beta patch notes, and some were carefully kept in secret till this moment. Anyway, today we will talk about everything in more detail. Rest assured, many interesting things lie ahead! So, shall we start?

Choose Your Destiny (Again)
Respec. Yes, you heard that right. You will finally be able to redistribute and reallocate all of the skills, stat points, feats and everything else! You’ve been asking us to add this feature for a long time. It looks so common for a computer game, but we couldn’t find a compromise that wouldn’t hinder the story and the inner logic of the game world. Finally, after a long search, we think that we’ve found that happy medium, which won’t lead to abuse but will help players fix some of the level-up and character generation mistakes instead.
In the Enhanced Edition, you’ll find a new option allowing to turn respec on and off. The high difficulty levels cannot tolerate any hesitation, so on Challenging mode and higher the option will be turned off by default. And if you’d like to turn it on manually, the difficulty level will automatically switch to “Custom”, thus locking all of the “Challenging” achievements.
Respec will be available for purchase from Anoriel Eight Eyes, the same person you buy mercs from. First three uses are free of charge, however, anything above that will cost you - more and more each time. You will be able to respec your main hero and your custom characters completely. As for the companions, they can only be reset to the level they had when you met them (for example, you will be able to reset Octavia down to total character level 2 with 1 level of rogue and 1 level of wizard).

Even More Random Encounters
Travelling through such a wide and open land such as the Stolen Lands, you want everything to maintain this feeling of adventure and freedom. That’s why we decided to add some new random encounters for you. And by “random” we really mean random - not only new battle encounters, but also completely different ones. For example, now on your journey you will be able to meet a wondering vendor, whose goods range would grow every time you meet him. We won’t tell you about the others, though… Let the new encounters stay a mystery for now. Explore, travel, and get ready to run into a couple of surprises along the way!

Battle Toads
Those Pathfinders who are keen on natural science will be glad to hear that a new specimen has been spotted in the Stolen Lands. Villagers talk of toad-like humanoids known as boggards, whose kind have never been seen in these parts before.
Those creatures are able to use armor and weapons, they can intimidate their enemies by loud croaking and some of them are even able to cast magic.
Boggards normally appear only four feet tall, as they sit back resting on their long, muscular hind legs like a frog; at full height they are substantially taller. Boggards seem to prefer temperate swamps and marshlands, although some breeds have also been found along the river banks of the tropical rainforests. Their webbed hands normally wield crude weapons made of indigenous swamp material, often clubs of wood or bone, studded with the sharp teeth of local beasts. The armour boggards wear is of similar construction, being made of crudely cured reptile hides and the shells of giant turtles. Boggards make little use of metal, as it corrodes quickly in the humid environments they inhabit. They value magic items when they can obtain them, due to their resistance to physical corrosion.
Boggards, like the toads and frogs they so closely resemble, change their appearance depending on their environment. Which means boggards from different parts of the world will have different skin color, as well as different unique abilities.
Most tribes are led by powerful priest-kings who have been fed rare, hallucinogenic, blue dragonflies that allow them to hear the whisper words of their dark deity, the demon lord Gogunta (although some tribes are known to worship other demon lords, or even Rovagug himself).

Energy Fireworks
To improve immersion and make the action more dramatic, we’ve decided to add some new visuals to the game. Enhanced Edition will introduce new visual effects for death from different energy types. They will trigger if the death was not caused by a critical hit and not by level 0 magic. As you probably guessed, the actual effect depends on the type of energy that made that last deadly hit.

Start of The Adventure
Since the official release, we’ve put months of hard work into this game and made numerous improvements along the way, but even then we still felt that the Stolen Lands were too harsh for far too many new players. We deeply researched the first chapter and made a big survey, gathering opinions from more than 1000 players. So that’s what we decided to change:
Spider swarms. This enemy appeared to be a real pain for lots of players. We’ve nerfed them, we’ve added new tips, we gave out extra flasks of alchemical fire… and to no avail. Spider swarms continued to be a major source of frustration, especially during the first playthrough. So we dealt with the problem drastically: we redesigned the fangberry cave. From now on, the pesky spider swarms won’t stand in your way. You’ll be able to either gather the berries and leave in peace, or go to a separate part of the cave to fight the swarms anyway - and get a separate reward for that.
We moved some of the locations around the global map to make the difficulty curve more smooth and better balanced.
Three completely new lairs have been added: two for boggards (the new monster type discussed earlier) and one for manticoras.
Another painful enemy for many a player was the Technic League. We decided to take the blinding spell out of their arsenal. Now players will encounter “blindness” as a condition for the first time much later in the First chapter.
We added new packs of ordinary wolves in the Old Sycamore area. We also made the sleeping bandits a little weaker.
We adjusted and re-balanced the AC of some enemies
.
We hope that now the game will play more smoothly and logically for you, and no sudden difficulty spikes will confuse you.

FINISH HIM!
There is another ability in tabletop which we lacked in the digital version - the ability to finish the enemy off with one fell blow, «Coup de grâce». It’s as simple as that: any character with a melee weapon can finish off a helpless creature (sleeping, paralyzed, etc.) using a full-round action. For this feature, we added special new character animations. Be firm, be merciless, and leave nobody behind!

In the name of Our Lord in Iron
Adepts of Nunchaku, Throwing Axes or other types of weapons which were under-represented in the game before - this is your time! Praise be to Gorum, for we’ve added more Dwarven Urgroshes and Waraxes, Fauchards, Flails, Shortspears, Darts, Double Swords and Axes to the loot - all of these used to be exceedingly rare. We’ve also added weapons of other types, including Battleaxes, Earthbreakers, Gnome Hooked Hammers, Great Clubs, Heavy Flails, Light Hammers, Light Maces, Longspears, Starknives and others.
Totally, there are now more than 80 new spots for you to restock your armory! 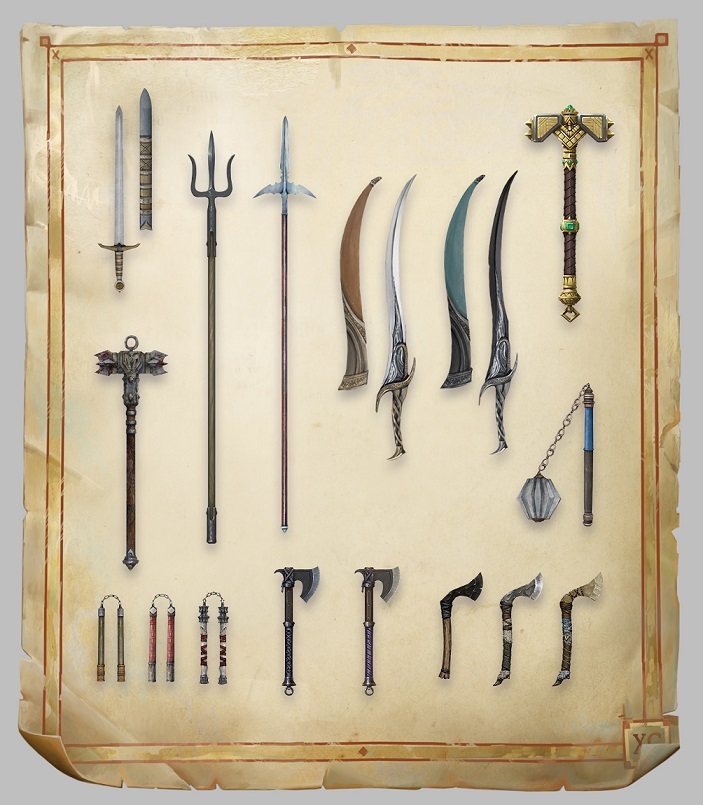 ***
That’s all the new features of the Enhanced Edition we wanted to share with you for today. But that’s still far from the full list! Expect new posts, read the previous Diary in case you missed it, and also join us on dev streams, where you can see even more and ask anything you’d like. Last but not least, do not forget that Enhanced Edition is in open beta right now, so if you prefer getting your hands dirty to reading or watching others play, be sure to join!
That’s all, folks - see you all in the Stolen Lands!

Hey, guys, I’m really sorry for posting the Diary here a couple of days late ^_^’’ Been horribly sick. Will do better the next time.

Hey, guys, I’m really sorry for posting the Diary here a couple of days late ^_^’’ Been horribly sick. Will do better the next time.

Not a problem. If you force yourself to work while you’re sick chances are you’ll stay sick longer.