I’m in a Pathfinder group that meets once a week, and occasionally one of us can’t be there because of other commitments, the usual. The first time we just rescheduled, but the second time I offered to run a one-shot instead. I grabbed an old 3.5E free module and recoded it, and the team had a good time. Which was a relief to me, given I’m pretty sure George Bush was still in office the last time I GM’d anything.

So, last week we had another cancellation, and I told the guys and gal to get their character sheets from the last one I ran – it’s become less one-shots and more “episodes”, which is kind of the way my brother and I played 3.5E together back in the day – and I’d figure out something for them to do. Our usual GM makes a comment, I forget the context, about his character, a CN Inquisitor of Lamashtu, hating devil-worshippers (which makes sense given his alignment and Lamashtu being a demon).

And I get this weird idea. I had set the previous episode in the Narlmarches during the Varnhold Vanishing, just for flavor, but I thought, why not take it one step further and make my Baroness (paladin of Erastil) the quest giver?

Furthermore, why not take everybody’s least favorite quest in Pathfinder: Kingmaker and make it actually fun to play?

Since it had been forever since I’d written anything original and I had very little experience balancing encounters, I got some assistance from the player who wouldn’t be there: he’s played PKM and immediately knew the quest I was talking about without me even having to name it (“Oh god, that one?” “Yep, that one”), plus he’s currently GM’ing the Hell’s Rebels AP for another group so he knows how to set up encounters.

On his advice, I borrowed Linxia Benzekri’s statblock from Hell’s Vengeance Volume 4: Wrath of Thrune and added a third level of Hellknight, and built her an NPC Hellknight squad of a cleric (hellspawn tiefling Asmodean advocate 5/Hellknight Signifier 1), fighter (armor master) 5, archer (slayer 5/Hellknight 1), and magus 6. Darven became a thug 4/infernal bloodline sorcerer 4 and, since he’s a pirate-turned-gangster king, I grabbed a half-dozen random mooks from the d20PFSRD to be his goons.

Personality-wise, I wrote Linxia as being less of an outright asshole and more out of her depth in dealing with the libertarianism of the River Kingdoms, and Darven as more of a narcissistic organized crime boss with delusions of grandeur. I made a PDF of the adventure here.

The party was 6th level and had previously seen off a green dragon druid in the northwestern hinterlands while the Baroness and her companions were handling Vordakai, and word got around.

The quest picks up after Natali Cervi, paladin of Erastil and Baroness of Cervosia, has already run the Hellknights out of town; however, she’s learned while she prepares to march her army to fight Armag that Linxia is still causing trouble in the southern villages, so she sends word through the priesthood of Erastil that she’d like to hire them. The party consists of:

They’re given the mission by Baroness Natali at Stag Keep. There’s discussion about how she had the Hellknights escorted out of town after they started harassing citizens and then tried to break into Linzi’s printing house to destroy the presses. She impresses upon them that she’d prefer if they ejected the Hellknights from Cervosia without killing them, in large part because she has more than enough on her plate as it is without fielding angry queries from Infernal Cheliax. It’s suggested that since Darven is a pirate, they might try the docks district on the lakeshore.

Darven finds them, he’s smarmy and a bit of a dick, offers them five grand up front to kill Linxia, five more upon proof of death. Bas offers to fake his death by cutting out a section of skin with identifiable tattoos on it, Darven makes a crack along the lines of “We’re not friendly enough for me to show you any of my tattoos.” Kira notices with a Knowledge (religion) roll his cufflinks are unholy symbols of Mammon and he spills the beans about his contract to “found a kingdom”. They take his money anyway, get the Hellknights’ location, and he vamooses, but afterwards Kira remarks that it seems like the only actual good person in this whole mess is the Baroness. Still, they agree to at least check out the Secluded Lodge.

They take a riverboat to get to a dock near the lodge, and Bas, being a monster hunter by trade, suggests heading along the riverbank instead of taking the main trail up to the lodge. I decree they get jumped by (roll on encounter generator) 8 goblin dogs.

They make short work of the pack of dogs, killing 6, scaring off the other two, and then they hear a bowshot and a yelp from up the hill: the Hellknight slayer archer, Giulietta Turchi, was out patrolling and heard the fighting. She invites them up to meet her boss.

Things are tense: behind the screen they’ve picked up on Bas’s Chaotic Neutral alignment, and the hellspawn tiefling, Quintillus Pagano, takes an instinctive dislike of his oni blood. Bas tries to Bluff that they haven’t met Darven, fails by at least 10 points against Quintillus’s obscene Sense Motive score. The Hellknights all go for their weapons… and Kira saves the day with a well-timed Diplomacy check. They manage to hash out a contract that if the party helps deliver them Darven, the Hellknights will stop harassing the Cervosians and leave.

They figure out the location of Brineheart by talking to the locals and the party heads that way. They find a dingy, depressed little fishing village on the Little Sellen River that has been taken over by Darven’s pirate gang, and after foiling a pickpocketing attempt by some local children they are led to his manor, such as it is. They get inside, deliver Linxia’s suitably bloodstained signet ring (the agreed-upon proof of death), and then Katya jumps the nearest goon.

I give them a surprise round, they take out a mook and the cleric of Mammon in nothing flat, Kira gives Darven a nasty slash with her greatsword but he escapes with a potion of invisibility and goes to fetch help while the other goons fight the party. Said help is a gilded devil, a third-party creature I grabbed from d20PFSRD.

Bas and Katya deal with the rest of the mooks while Kira tries to pursue the invisible Darven; GLIMNA PUNCHFORGE! manages to hit him with glitterdust and foil his invisibility. The mook alchemist surrenders in exchange for letting him treat the ranger’s wounds, while Kira gamely holds off a CR 8 devil by herself until the others can catch up. (As Bas’s player said afterwards, “That thing hits like a bus.”) For his part, Darven was blinded by the glitterdust and is hiding behind the devil and casting spells to buff up.

As Bas and Kira cut the gilded devil down to size, they hear a screech from above and see a black-winged woman with a flaming longbow drawing a bead on them. The players start swearing because I threw an erinyes at them after the gilded devil because I’m evil. Then an arrow hits the erinyes from down the street: the Hellknights have arrived and joined the fight. My initiative tracker spreadsheet by now looks like this: 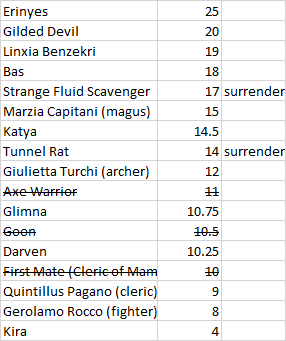 The Hellknights and the party spend the remainder of the session plinking the erinyes to death. Linxia cuts off the unconscious Darven’s head as proof of death for her superiors, and Bas takes the cleric of Mammon’s unholy symbol as a trophy. I had to wrap the session up very quickly at that point because dinner was ready, but the players had a blast (which is good, I was worried that last fight had turned into a bit of a slog), and I told them to level-up their characters for later reuse because, screw XP, they resolved the problem with the Hellknights, freed a village from a criminal gang, and killed two CR 8 fiends.

Overall, not a bad outcome for a quest everybody who plays the game hates.